The landscapes in Mikumi National Park can easily be compared to those of the Serengeti National Park as acacias, baobabs and tamarinds dot the savannah. The Ruhebo and Uluguru mountains as well as some interesting rock formations can be seen close to the northern boundary of the park and the Mkata plains are by far the best place for game viewing.

The park is famous for its healthy populations of elephants and buffaloes which can easily be spotted out on the plains. The tamarind trees are a favourite spot for elephants and giraffes who spend hours eating the fruits.

Another highlight in terms of wildlife is the greater kudus and sable antelopes. These shy antelopes like to hang around the Miombo woodlands in the southern part of the park near the Vuma hills area.

The Mkata plains are also a great place for birding. Mikumi boasts with a respectful 400 species of birds with the most common ones being the black bellied bustards, guinea fowls, marabou storks, bateleur eagles, ox peckers, colorful lilac breasted rollers and yellow throated long claws. These are just a few of the many species you are likely to spot whilst there. The park also witnesses a passing of migrating birds from Europe during the rainy season.

Mikumi National Park is also home to lions as well as leopards. Even the African wild dog is present and spotting this rare creature can be a real treat for visitors.

There are two artificial pools approximately 5 km north of the main gate and both of them are famous for Mikumi’s few hippos. Furthermore the pools attract an array of water birds such as blacksmith plovers, cattle egrets, various herons, fish eagles and many more.

As Mikumi National Park is part of the Selous ecosystem it always has a good number of wildlife moving in and out of the park. This constant movement is however being disrupted due to the A7 tarmac road that runs through the park.

The park is situated between Dar es Salaam (200 km, 4 hours) and Tanga (75km, 3 hours) and borders the mainland coast.

The Saadani National Park is home to a variable mix of both marine and mainland flora and fauna. The vegetation in the park is quite unique and includes mangrove forests around the winding Wami River and ocean, clumps of palm trees, coral reefs in the Indian Ocean, short and tall-grass savannah and the harsh black cotton plains.

In terms of wildlife, Saadani has a thriving population of waterbucks, wildebeests, hartebeests, reedbucks, buffaloes and giraffes. Warthogs, baboons and colobus monkeys are often spotted, while elephants, lions and leopards are quite shy. But even for ornithologists this place is truly spectacular. A boat safari on the Wami River is a true highlight for any visitor and apart from pods of hippos and huge crocodiles, malachite, pied and even giant kingfishers can also be seen. Other common birds include the woolly necked stork, common sand pipers, lilac-breasted rollers, palm nut vultures, fish eagles and ground hornbills.

Activities in Sadaani National Park include game drives, boat safaris and walking safaris accompanied by an armed ranger. Historical tours to the old Saadani fishing village to see the remains of buildings that existed when this place was a bustling port trading ivory and slaves, can also be organized. Even cultural tours to the main ethnic tribes in the area (Waswahili, Wazigua and Wadoe) are on offer. Further ethnic groups from other regions have also migrated to the region because of better trade opportunities. The Wamangati, originally from the Ngorongoro Conservation Area, send their cattle to Zanzibar on traditional dhows in order to make a living.

Unlike as in other national parks in Tanzania, visitors can combine a safari with a relaxing beach stay in Saadani National Park. The beaches are clean and lined with palm trees. Saadani’s coast is hot and humid and swimming is pleasant with the ocean’s temperatures usually reaching around 25°C. Maziwe reef can easily be reached by boat from anywhere along the Saadani coast.

Saadani National Park is a place for adventurous and luxury travellers as well as families. Accommodation on offer includes public campsites, luxury lodges and tented camps in- and outside the National Park.

These diverse areas of the park support 1650 plant species currently recorded in the park so far.
In drastic contrast, Selous Game Reserve has about 830 species recorded and the northeast Serengeti only 410.
Large populations of all the great predators are present in the park.
Lions, leopards, cheetahs, spotted hyenas and wild dogs are all sighted.

Large mammals that roam the park include the largest population of elephants in Tanzania, with estimated numbers as of 2013 standing at over 20,000 individuals.
Species commonly sighted in the park include buffalos, zebras, impalas, giraffes, elands, greater and lesser kudus and warthogs, all thriving along the Great Ruaha River.

Such an ample vegetational diversity creates an extremely abundant bird life, with representation of both eastern and western species. Current records estimate that 573 species live in the park so far, but more are constantly being recorded. 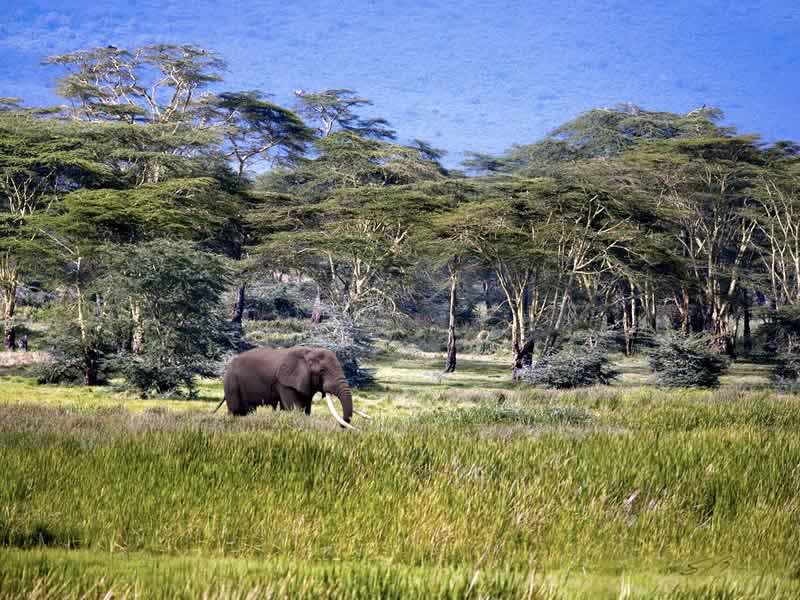 The Mkomazi National Park is located in the northern part of Tanzania, between Moshi and Tanga. The park finds itself in a beautiful setting with both the Pare and Usambara mountains towering above its boundaries. Depending on the weather, Mount Kilimanjaro can also be seen from the park.

In terms of vegetation, Mkomazi marks the southern tip of the Sahel zone which resembles that of a dry, desert like landscape. Due to the climate, the vegetation primarily consist of acacia-commiphora woodlands and towards the western mountains the vegetation changes to a dry land forest.

The main source of water in Mkomazi comes from the Umba River in the southeast. Apart from that, the park sees very little precipitation all year round making game drives along the river area definitely worthwhile.

The most famous members of the Mkomazi natives are surely the African wild dogs and the endangered black rhinos that live in a private sanctuary. This park is also one of the best places to see large herds of oryx and gerenuks roaming freely in the open bush land. Other small and large mammals that call Mkomazi their home include lions, leopards, cheetahs, hyenas, jackals, elephants, buffaloes, hartebeests, giraffes and warthogs.

A healthy population of 450 bird species are also found in the park and several species can be seen during a game drive. The most commonly seen species include go away birds, ostriches, long crested eagles, hoopoes and bustards. Around the Umba River, sightings of kingfishes, flamingos, cormorants, plovers, ducks and crocodiles basking on the banks are common.